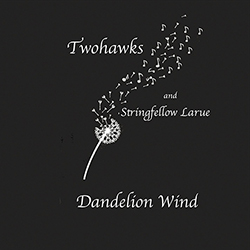 Be the first one to write a review
$16.95 in stock
Native American Music CD

This CD I made with a group of ladies in my community that sing and play musical instruments and wanted to do an album with Twohawks. There are some vocals on the album and all are original songs written by me. The song Dandelion Wind (vocal) tells a story about a man going home and drinking Dandelion Wine (a favorite drink of the Choctaw people) and he over does it and gets a bit intoxicated. The album also features some sounds of the didgeridoo and other world instruments such as the Udu and the Djembe. Wildflowers is my personal favorite on this CD Flute and the mountain dulcimer are used on this track. The word Nalosafayla is a Choctaw word which means Will 0 the Wisp and this track tells the story of one of the mythical people of the Choctaw Indians.